[If you do not know, it is dangerous! ] For e-commerce distributors such as Amazon, PSE, PSC, misunderstanding about radio law, etc. Best6

Up until now, I have answered several questions about the certification system.
However, it was a content that it was good to learn little by little while doing it toward the certification acquisition from now on.

In other words, even if we didn't know it now, it wasn't a risk to our business.

However, this time, I would like to take up the contents that are often commonly misunderstood in the rules of authentication, and that misunderstanding can lead to fatal mistakes, and that if you do not know it, you will lose a lot.

Everyone has the possibility of falling into a state like "PSE product collection case of our case" in the previous article (1Day accident case explanation such as PSE, PSC, radio law, etc. for corporate certification personnel).

There is a lot of fragmentary ear academic information on the Internet, but if it is not living information in line with practical work, it is not only something that can not be used at the forefront of business.

To be honest, there is also a story that is as much black as possible, and I can't write anything like that here, but I hope it will be useful even one.

Because the PSE mark was attached to the product bought at Alibaba, can it sell as it is?

To say first from the conclusion, out! are.

However, I have never seen a site that logically mentions this idea. I can't say indescribably whether the person writing knows and doesn't write, or after all doesn't know anything, but in this case it's out.

There are also clear reasons to be out, so be sure to learn here.

I feel that it is a great know-how that no one is writing, but I will publish it.

First of all, here is an example of a product that is marked with a PSE but is illegal. 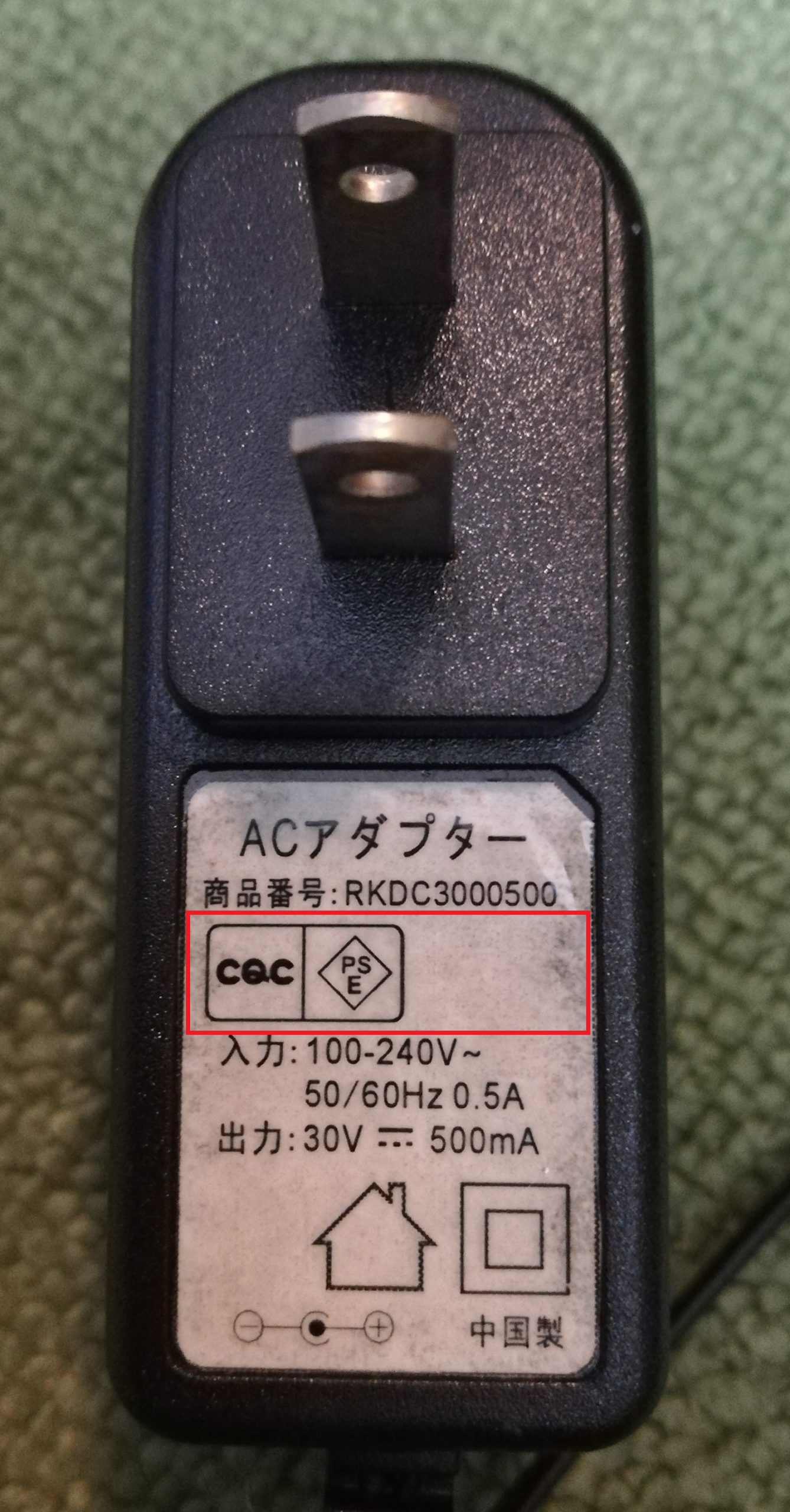 Sure, there is a PSE mark, but there is no one. If you come through here, it will be advantageous when dealing with products such as PSE and PSC even when importing to China.

Let me quote the page of the Ministry of Economy, Trade and Industry.

Citation: Ministry of Economy, Trade and Industry_Electrical Appliance and Material Safety Act_Flow of Notifications and Procedures_Example of Display

An example of a nameplate (label) that displays the PSE mark on the product is shown, but what is the problem this time is the red line part (according to our company).

A Japanese corporation (importer name) notified to the Ministry of Economy, Trade and Industry is required for PSE labeling.

Let's see if the importer name is displayed along with the PSE mark, even if it is a bad thing to check if the PSE mark is incorrect.

In that sense, even if a product purchased on an overseas site such as Alibaba shows the PSE mark, it is almost 100% fake.

In addition to the term "fake", it can be said that it is a PSE that does not go through formal procedures. As I mentioned earlier, if there is no importer name, it is an illegal PSE after all.

You may see a site that urges you to be careful because the PSE mark may be forged, but if you write about this importer name, if you write about it, it is not touched on that point to solve it in one shot, I think that the writer who is writing itself does not grasp PSE firmly.

In addition, it is the same for PSC that the name of the importer is required.

On the other hand, under the Radio Law under the jurisdiction of the Ministry of Internal Affairs and Communications, it is not necessary to display the name of the importer if only the radio law mark is displayed. However, to check whether the number itself is genuine,

What is necessary for displaying basic knowledge and skill mark for those who have trouble with radio law (technical suitability) certification? Wifi, Bluetooth, 4G are essential radio law! _ 7 Beware of malicious illegal radio products! There is a Chinese business operator who falsification of radio law numbers etc.

Again, even if there is a PSE mark on a product bought on an overseas site such as Alibaba, it will not sell as it is.

Let's perform PSE inspection by ourselves firmly, report it to the Ministry of Economy, Trade and Industry, display the PSE mark and the name of the importer and sell it.

As an aside, pse specified electrical appliances (rhombus PSE) target products can be sold as an official importer if you obtain a supplementary copy of the certificate and apply for it without having to perform inspection from the first.

However, in that case, please be careful because it is necessary to keep the original by all means.

If the original is not stored, it will also be subject to administrative guidance from the Ministry of Economy, Trade and Industry.

The product I bought at Alibaba did not have a PSE, PSC, radio law mark, but it works normally, so can it sell as it is?

I don't need to say it now, but if I dare to repeat it, it won't sell. Be careful because it will be illegal if you sell it.

This is a laser pointer that works normally, but the PSC mark is not displayed and is illegal in Japan. 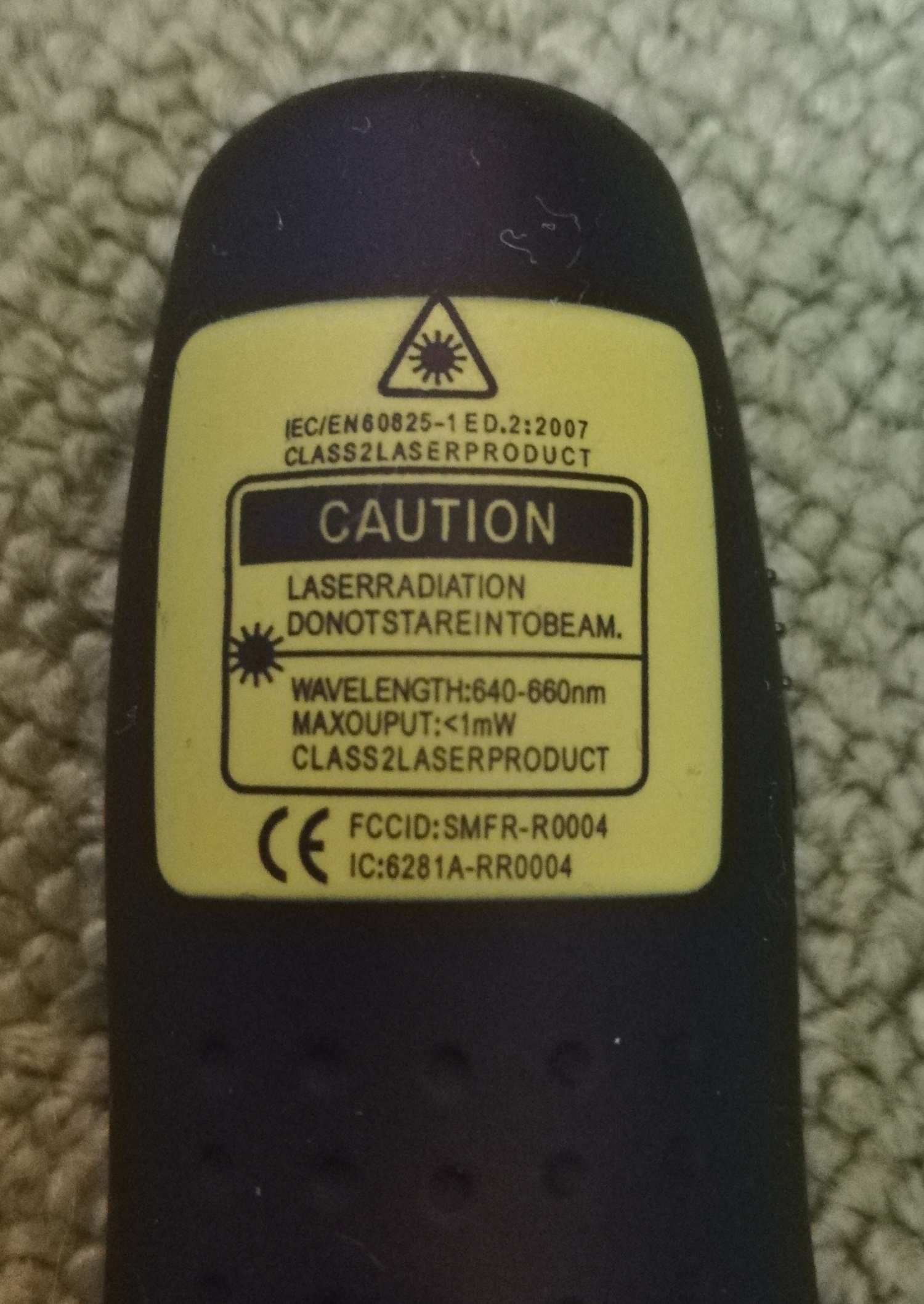 From the user's point of perspective, it is cheap to use normally, so is it okay? As a seller, if the Ministry of Economy, Trade and Industry discovers that they are selling this, there is no doubt that administrative guidance will enter.

On the EC site, if the mall side does not notice, it may sell as it is, but if there is a notification from a user etc., it will be suspended in one shot.

In addition, it will never sell at real stores. The store side also looks closely at the certification relationship.

It is a story that suffers with products that have the PSE mark in the preceding paragraph but do not have the importer name, but then, when it comes to the story that the product whose labeling is incorrect is functionally and safely different from the product that has passed the test such as PSE, a solid display is not understood.

In particular, many Chinese factories have cleared CE certification in Europe, and there are many cases where it has flowed to Japan as it is.

Certainly, the quality level of the current Chinese factory is increasing.

Chinese operators who sell illegal goods should not change their performance, so there is no problem! There are many insists, but the problem is the responsibility when something happens.

Both PSE's electrical appliances and PSC hazardous products are regulated because there is a possibility of product accidents. First of all, to meet the technical standards established by the Ministry of Economy, Trade and Industry of Japan.

And even so, in the unlikely event of an accident, it is necessary to write the necessary mark and the name of the importer to identify who the supplier importing the product is.

Especially when importing and handling machinery, try to check for laws that conflict with them.

Also, if you have an unfamiliar mark, first check what it means and try to be aware of the relevant laws necessary for selling in Japan.

Keep in mind that selling illegal items like the pictures can be quite difficult.

Isn't self-inspection (report) optional? In the first place, we do not have such a system.

Even if you pass PSE and PSC inspections, you must check each time you produce to ensure that they meet a set technical standard, and keep a record (report) of the contents.

In detail, it has appeared many times, but "PSE, PSC, measurement method, radio law suitability, etc. are not finished once certification is completed, and even after certification, voluntary inspections are required, and there are trial tests by related ministries and agencies." See "What is PSE and PSC Self-Inspection?"

Indeed, this voluntary inspection report may be unlikely to be requested by the Ministry of Economy, Trade and Industry to disclose the product if there is no problem.

However, when you are asked to disclose something, it is not enough not to do so. That's what awaits you, such as penalties that were the same as when you were selling illegal goods.

I don't think a trading company that imports and sells Chinese products has the know-how to create its own inspection reports. In addition, if we try to create such a system from the first place, the cost of people, time, and funds will not be matched.

So basically, let the Chinese factory you produce do everything. We also have such know-how, so please contact us if you are unsure.

However, please do not leave the mistake that the preparation of the voluntary inspection report is voluntary by any means.

Isn't it illegal to sell sales malls such as Amazon that allow the sale of illegal goods?

There are many people who are in trouble because the number of rivals of Chinese operators who will be illegal increases too much with products such as PSE, PSC, and Radio Law sold in-house.

There are many people who do not easily deal with it even if they contact Amazon, and Amazon, which allows illegal goods to be sold, seems to think that this is the same crime, but under the current law, sales malls such as Amazon are not guilty.

It is a seller that has a crime to the last, so I think that it is better not to misunderstand that area.

However, even though I acquired certification at a cost, I can understand very well the irritation that it does not sell as I think because of illegal rivals.

The question is who to contact illegal. Amazon has many departments, and contacting a different department basically doesn't work with you.

In addition, if it is a properly certified product, I think that it can simply sell outside Amazon, so let's sell more and more at other malls such as Rakuten and Askul.

Of course, don't sell. There is no doubt that the trader who sells without certification is only going through the eyes of the watch by chance, and it will be illegally caught sooner or later.

Because products that require certification are sold without certification, does not authentication really be necessary? Let's be careful because the misunderstanding that is quite dangerous.

On the other hand, if such products are certified first, I think that business can be developed advantageously later.

Is it not possible to punish overseas business operators because they are not applicable by law even if they sell illegal goods?

You certainly won't be able to punish. It is impossible for people from the Ministry of Economy, Trade and Industry, the Ministry of Internal Affairs and Communications, and the police to go abroad (China) to arrest people in factories.

In addition, under the current law, PSE and PSC are domestic laws, so only domestic businesses are punished for violations. Overseas business operators are not eligible.

Because of such risks, only Japanese corporations have the right to sell domestically as importers.

Then, it becomes a discussion whether the overseas business operator who is illegal is unchecked, but unfortunately, the penalty cannot be given to the entrepreneur itself.

However, you can stop the sale of the product. That's all a general business can do, but let's sell regular products to contribute to the safety of users. 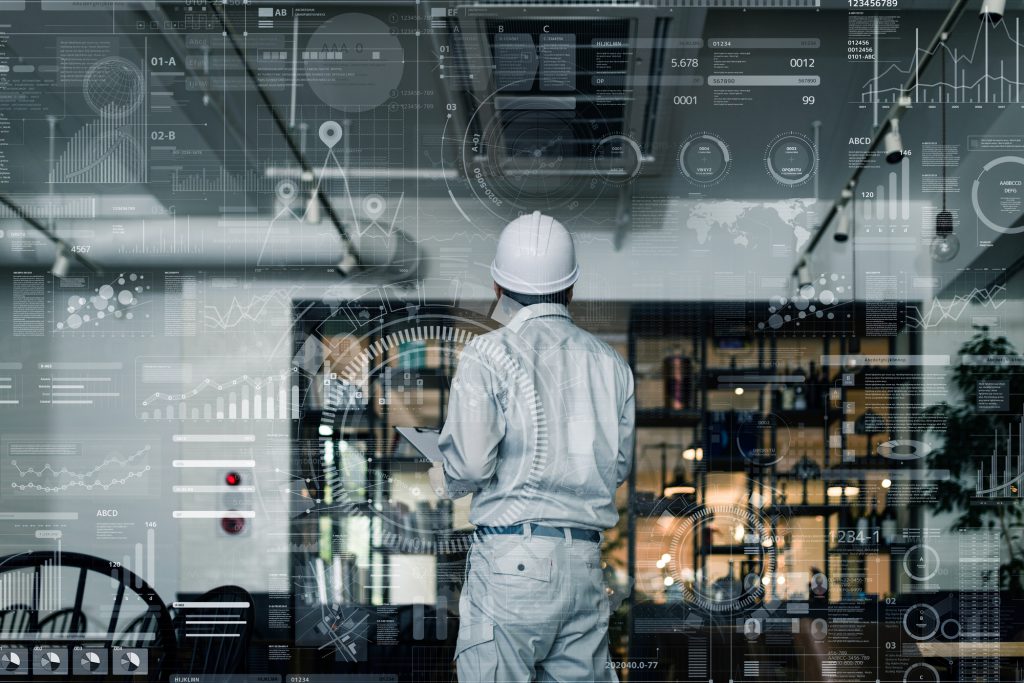