Sedori? FX？ Uber Eats deliveryman? I have many side jobs, but about the possibility of China import business

This time, I would like to write about the possibility of China import business.

When it comes to the end of the lifetime employment system, for example, there may be more ways of working, such as repeatedly changing jobs and stepping up at multiple companies or somehow not eating. It may not be a problem for the age at which you can work, but the biggest problem is "retirement allowance".

Until now, most japanese life plans have been to work until the age of 60 to 65 to receive a large amount of retirement allowance and spend old age, but it is easy to imagine that when you cross multiple companies, you will not get or will have much less retirement benefits than before.

On the other hand, the company we work for has not changed as much as possible, and the flow of doing side jobs is surely coming. As for companies themselves, the number of companies that have changed their policies and called "side job freedom" has increased from the conventional ban on side jobs.

Among them, as things that can earn a little pocket money while working, there are things like part-time jobs representing Uber Eats delivery staff, individual business such as sedori, short-term investments like Forex, blog and youtube updates.

From here on, it is a story that includes a position talk, but I think that the current problem will not change fundamentally even if you do a little part-time job.

I can't count on retirement benefits in my 60s and beyond, and on the other hand, in what is said to be a 100-year life era, I think it is necessary for both salaried workers and corporate managers to create new revenue sources other than their main business from now on.

In doing so, what is necessary is "earning power", and if you break it down a little more, "choose a product, purchase it, sell".

When you can do this basics, you can pursue it, and you can develop it into various businesses. So to speak, Chinese imports are packed with the basics of business.

This time, I would like to write about the points that are considered severe in the long term and the advantages of the Chinese import business, while taking up various side job businesses.

There is a limit to the earnings of labor-intensive side jobs.

There is naturally a limit to earning a part-time job that works at an hourly wage and a job or side job that allows you to get only the amount you did while the price setting is decided to some extent.

That's because my time is decided to be 24 hours a day. In addition, if you are doing your main business, you can naturally see that there is a limit to the time you can devote to side jobs.

Of course, I think it is important to have the experience of earning income outside of your main business, so it is very important to try various things first. I 100% agree on that.

The quickest part is that you might want to sell the supplies you're familiar with at Mercari.

However, from the viewpoint of continuing to earn, there will not be familiar waste forever, and since there are considerable intermediate costs, it is subtle enough to make a profit, and it will be the extent that cash income was able to be made to the last other than the main business.

Looking ahead, I think it is necessary to do leveraged work little by little that generates profits even when you do not work.

Gambling-type side jobs can be very damaging.

Short-term investment businesses such as Forex may make a lot of temporary money, but if an amateur dabbled in it, you may be able to take the funds with you at once. This doesn't mean it's impossible to recover, but it may take a lot of time to recover.

In that case, you will have to save money for a while just to recover, which is very inefficient.

In side jobs, you don't have to make less profit or profit at first, so it's the secret of success to keep it going for a long time. I think that there is no problem if the money is too much, but it would be safer not to touch those that could cause a big loss without much experience. 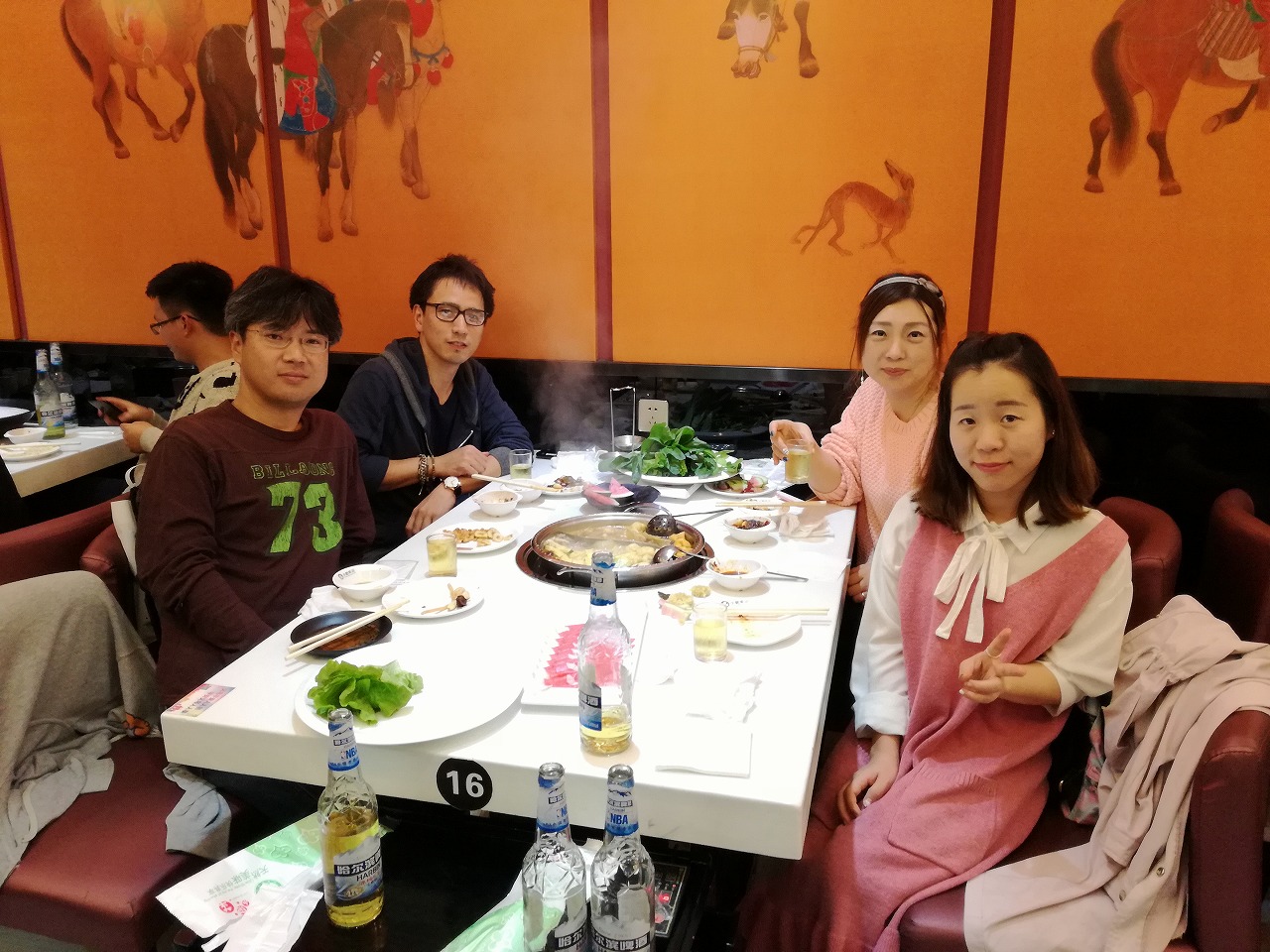 We had a dinner with the president and general manager (right two people) of a local supplier in Yoshitori, China. Both of them are fluent in Japanese and English, and I feel the high level of Chinese people again.

Until a little while ago, business book review blogs (e-mail magazine) were popular, but I rarely hear it recently, and I personally feel that the boom has gone around in the first place.

There are really only a few people who have survived in the business book review blog system, and like Atsuhiko Nakata's youtube university, I think it is a difficult area unless the cut is very novel.

On the other hand, contracting such as video production is also popular. I think that this is an area with a lot of demand in itself, and it may be a pretty good job because it can be done at home and leads to simple PC skill improvement.

However, what can be said together, such as book review blogs and video production, is that it is fundamentally a job that borrows the content of others.

I myself set up a business in the Chinese import business, and now I'm on the side of distributing videos (although the number is still small). I don't edit it myself, but I have a part-time job that I originally hire, but sometimes I get sales of video shooting.

Even if you listen to the sales contents, unless there is too much, you will not put out work to a stranger at all, it is an honest feeling as the orderer side. In this way, the contracting business with a lot of competition is very disadvantageous in business and tends to be subject to price reduction negotiations.

Even if you are doing a side job with great care, it is only a consumption of time after all in such a thing.

After all, people who have content by themselves are strong in the coming era.

I don't deny borrowing someone's content, such as video editing or blogging, but I think that if you do it anyway, you can enjoy your business more advantageously by choosing a business that has content yourself.

I can't continue unless I can do it at my favorite time.

How about being forcibly bound by other companies in daily life in addition to your main business, such as part-time jobs that are bound by hourly wages, jobs with fixed delivery times, work that must stick to the screen for a long time, such as Forex?

When you are pressed for time in a side job, mental stress accumulates, and after all, the work often stops.

Of course, working hours are necessary in the Chinese import business, and I think that the total value of that time will be much higher than work such as part-time jobs, but what is fundamentally different is that you can do it at your favorite time.

For example, it is possible to work together on weekends, such as lunch break time of main business, time after work is finished, and Saturdays and Sundays. If you negotiate with a local supplier in China, they will inspect, pack, and deliver the products and deliver them to amazon warehouses as they are. All you have to do is check the sales.

You can also work in such a way.

By the way, I was looking for products with my smartphone between commuter trains.

In addition, it is also possible to stop work once when you are busy by all means.

Some people say that it is more successful to work by expiring or concentrated, but that is a short-term story. Of course, the ability to do it in the short term is sometimes necessary, but since business is a long-term battle, a way of working that puts a load on a too short term will drain itself.

Starting with a reasonable schedule, resting enough as needed, and growing your business little by little, that's the royal road. For that reason, it is most important to work at your own pace.

A business that suddenly sets up a store will definitely fail.

This time it is a side job story, so I do not think that I will suddenly open a real store of a restaurant such as a ramen shop or a tapioca shop, but I will write it just in case.

The real store business has a large initial investment, know-how is required, and above all, it is restrained for quite a long time. There are no Saturdays and Sundays.

I think that you can not do restaurants etc. as a side job, so if you do it, you will suddenly leave the store business, but even if you suddenly start a restaurant, you will fail 100%, so let's stop for the time being.

I will omit the details, but as a basis of business, let's avoid those with large initial investments (compared to the funds and know-how that I currently have).

When funds and business know-how have accumulated through Chinese imports, if you have a passion for doing restaurants, you may want to try it.

In that regard, the Chinese import business can start with small capital. 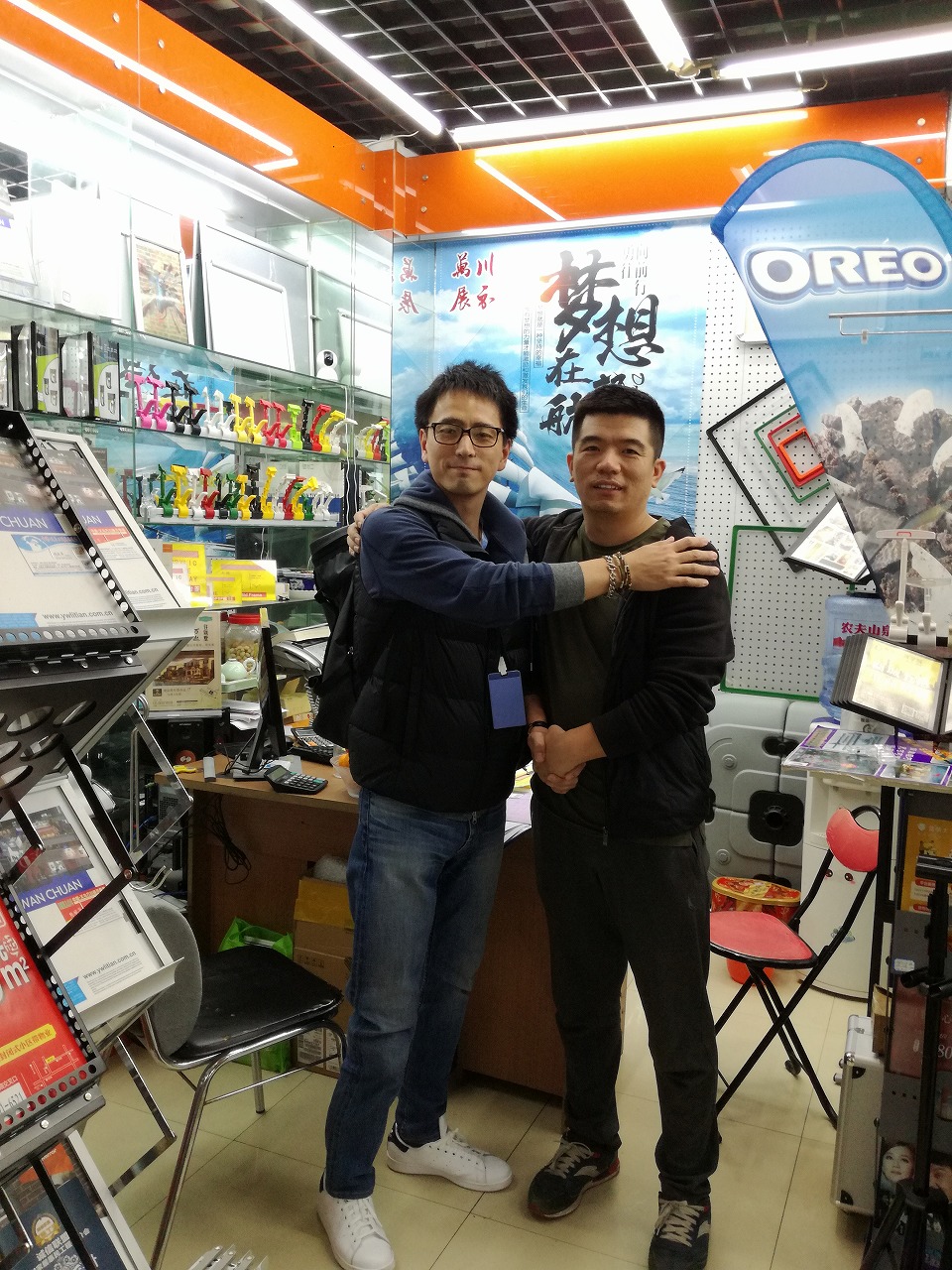 Photo with booth exhibitors at Yoshitori and Fukuda market. The negotiation was concluded and handshake.

China import business with the potential to expand into other businesses

I have explained the advantages of making the Chinese import business a side job in contrast to the problems of various side jobs, but I think that the most recommended point is the size of the possibility.

The series of trends of choosing products to sell by yourself, looking for them in China, transporting them to Japan, and selling them has the necessary elements for business.

Especially for those who only worked for the company, I think it is a rather shocking world. I wonder if I have been distracted many times. Even so, if I was fascinated by the depth and continued steadily, I was finally able to live independently and only in that business.

By the way, at first it was just a business content to sell things, but now we are doing license and authorization certification agency such as PSE, PSC, radio law, etc., and also managing restaurants. All of them are the first experience cultivated in the Chinese import business.

And while we are still halfway there, we have ambitions to go up to 10 billion yen in multiple businesses. Until a few years ago, I was a normal office worker.

Of course, it is up to each person to decide how large they are aiming for, but as I wrote at the beginning, I think it would be good to have the power to earn in a chaotic society.

Since it is a long working life, why not try to build a business with Chinese imports in the long term without being limited to short-term income?