How to solve problems such as defective products and breakdowns that are plagued by Chinese imports? In particular, in specialized fields such as machinery

We are basically a certification agency company such as PSE, PSC, Radio Law, Measurement Act, JIS, Medical Equipment, Food Sanitation Act, etc., but we also have technical resources related to machines in general.

For example, since the elements that make up a product, such as machine connections, structures, and parts, can be roughly understood, apart from certification, it is possible to make some judgments about why the product does not work well.

In other words, the advantage is that you can talk to the production plant about the cause of product defects, defects, failures, etc.

Conversely, because it is possible to do so, not only paperwork but also in certification agency, but also if some tests fail, the plan for countermeasures can be considered together with the factory.

Against this background, the number of inquiries that have been increasing recently

Instead of the certification itself, there are a series of defects in the machine products imported in-house.
I have asked the factory to strengthen the inspection system, but I want you to mediate as an interpreter because I am troubled by not being able to communicate,

There is a thing.

In general, there are no engineers and interpreters that far, but we have such resources.

This time, I would like to tell you about the recent problems and examples of customers who have solved problems by utilizing our resources.

Problem: Medium-sized precision electrical appliances and equipment that produces 2-3 defective products every time you purchase dozens of them

This time, the customer was originally a business operator A who received requests for PSE etc. of other electrical products. What I talked about was the medium-sized precision electrical equipment imported from China separately. For a long time, if you purchase dozens, you usually have 2-3 pieces defective.

If the product unit price is several hundred yen or several thousand yen, it may be possible to incorporate that defects can be made, but it is also tough even for thousands of yen.
Anyway, this product is tens of thousands of yen late, so it is quite painful just to have one defective product.

There was also the option of stopping it as it is if it was a one-off transaction, but apparently it is selling in Japan in no small way, so I want to continue to do business, so I was demanding improvement from the Chinese factory.

In the first place, we will briefly review the definition of "factory" and how to get together.

In a word, "factory" has a wide variety of forms.

I think that each factory has its own advantages, so it cannot be said that any type of factory is good in general, but it is an independent factory that Japanese operators can get to know through Alibaba etc. Among them, what form you are taking depends on the product you are dealing with.

In order to deal with a really high-level factory, it will be necessary to be introduced by suppliers and brokers in China, but the cost is also large, so unless it is a very large business talk, if it is the earliest stage or small trade, I would like to do it at basically low cost.

In addition, in some cases, it is also possible to go to the local factory and have business negotiations directly, but now there is a situation where overseas travel is quite severe due to the influence of coronavirus, so when it comes to communication, online such as e-mail and telephone will become mainstream.

In any case, rather than suddenly going out with a large factory, I personally feel that it is a smart way to increase the transaction volume little by little with a small factory that seems to be reliable, and to make the necessary consultations and arrangements each time.

I feel like I'm going to improve my factory, but I don't know how to do it.

The various types of factories mentioned above are different in their technical capabilities. In addition, there will be each field of expertise.

In addition, this factory is an assembly factory, and I am doing the type of work of purchasing (obtaining) existing product blueprints and assembling them accordingly. The advantage and merit in this case is that the product is still cheaply finished, and the disadvantage is that a certain number of defects will come out as in this story.

In response to Mr. A's offer, it is certain that the factory is basically positively willing, but as a problem, there was no idea what to do specifically.

I want you to respond by installing it there (business owner side in Japan) after that because I send parts related to the defective part,

It is an answer.

Such a thing is impossible because Mr. A is a trading company-like position and does not have the technical capabilities and equipment to install it by himself. Even if you can do it, if you start with no hints, it will take at least 5 to 6 hours, so you can not spend such time while you have a main job.

What I want to keep in mind here is that the factory is troublesome, so it does not go out with improvement, and it is not possible because it does not know how to do it.

It is a problem in itself、、、 but as a factory, I do not want to break the relationship with Japanese companies that I have been able to deal with with with them.

Therefore, it is important not to stop the transaction suddenly if it is said that the replacement part is sent as sincere as much as possible, and it causes the impatientness only there and there is no yar mind to the other party. The analogy is not good, but it is impossible to solve the problem of university students in elementary school.

In such a case, it is important for the business operator to patiently put out measures to build a relationship even a little.

Based on this background, we asked us to interpret in order to proceed with negotiations with the factory.

The main problem is that language barriers do not convey our intentions and proposals properly.

As For Mr. A, I was faintly aware that the Chinese factory did not have the ability to think and inspect it myself, and in that case, we examined various things by ourselves and devised a inspection method.

However, I was worried whether the technical content would be properly communicated to the other party, and we asked us that there was a resource where I could understand the technology and interpret Japanese and Chinese.

Originally, Mr. A and the Chinese factory exchanged in English.
Each other is not native Speakers of English. In addition, we are not very proficient in English with each other.

Since they do not understand each other in their own language, they probably adopted English to make the relationship even, but if it is a simple exchange such as buying and selling goods, it will still be sufficient, but proposals for improving product capabilities such as this time will be difficult to understand.

Rather than not being able to communicate, the factory needs to convert the content said in English into Chinese once and ruminate until it is further upset, and it is still a story that requires a suitable ability. This is not a Chinese yar spirit problem, it is simply a matter of ability.

When it comes to the problem of ability, it is necessary to prepare an environment in which the other party can respond with it rather than the gut theory. It will be miso in the foreground, but in that sense, it was a very wise decision that Mr. A asked us to do. 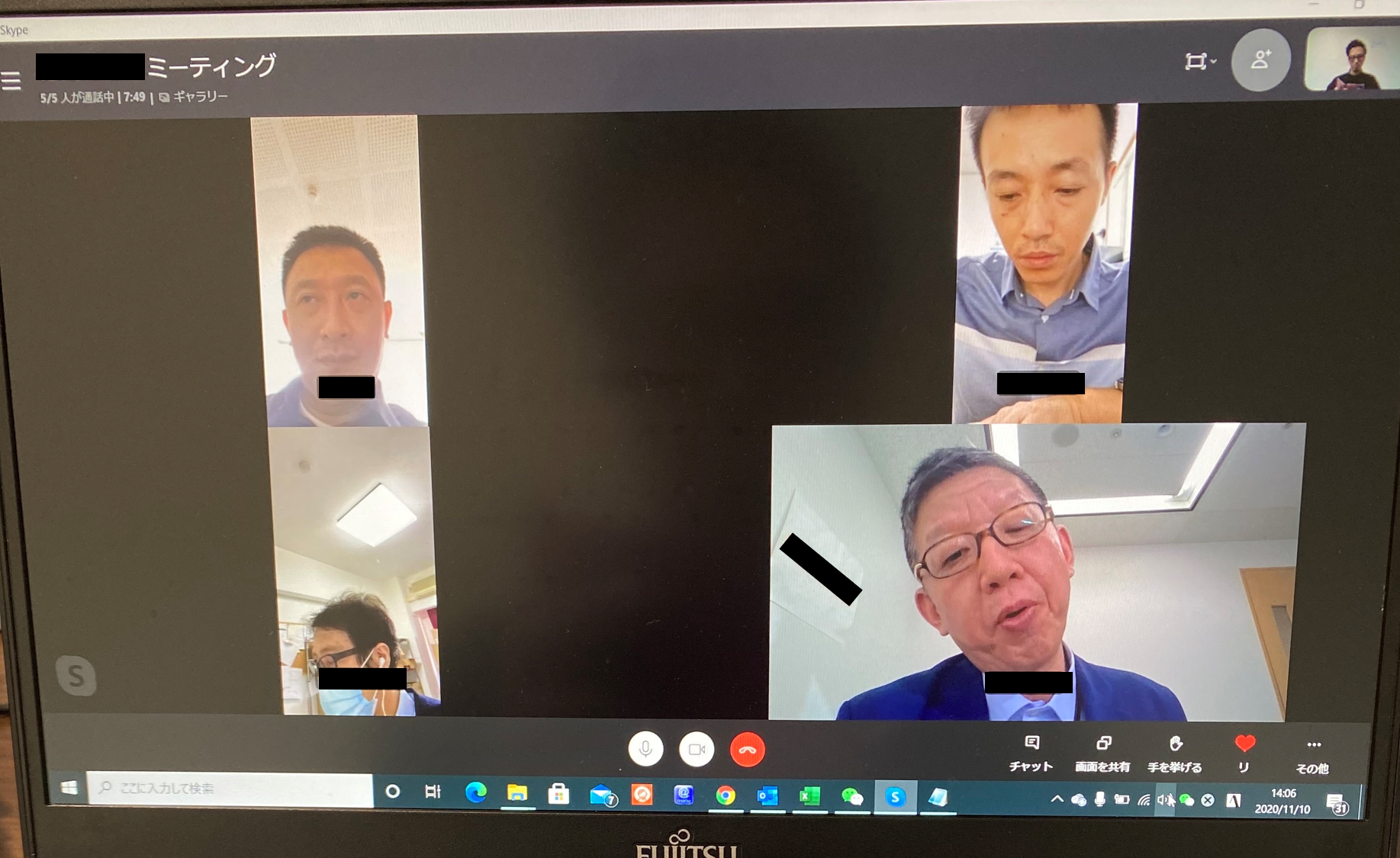 Online meeting scenery ※It is different from this meeting

Using wechat video chat, we held an online meeting with mr. A, our company (and engineers) and the factory, but the factory side participated in the entire factory, mainly the woman in charge.

It was a very favorable response from the stage of wechat's friend application, and he answered very much during the meeting, and I was able to see the high spirit of this problem.

At the meeting for about an hour, we conveyed mr. A's intention, the inspection method we devised by ourselves, how to proceed with future exchanges, etc. in Chinese, and we got the approval from the factory. Once we can reach an agreement there, the rest will not leave the outline of work even if we exchange in English as before. 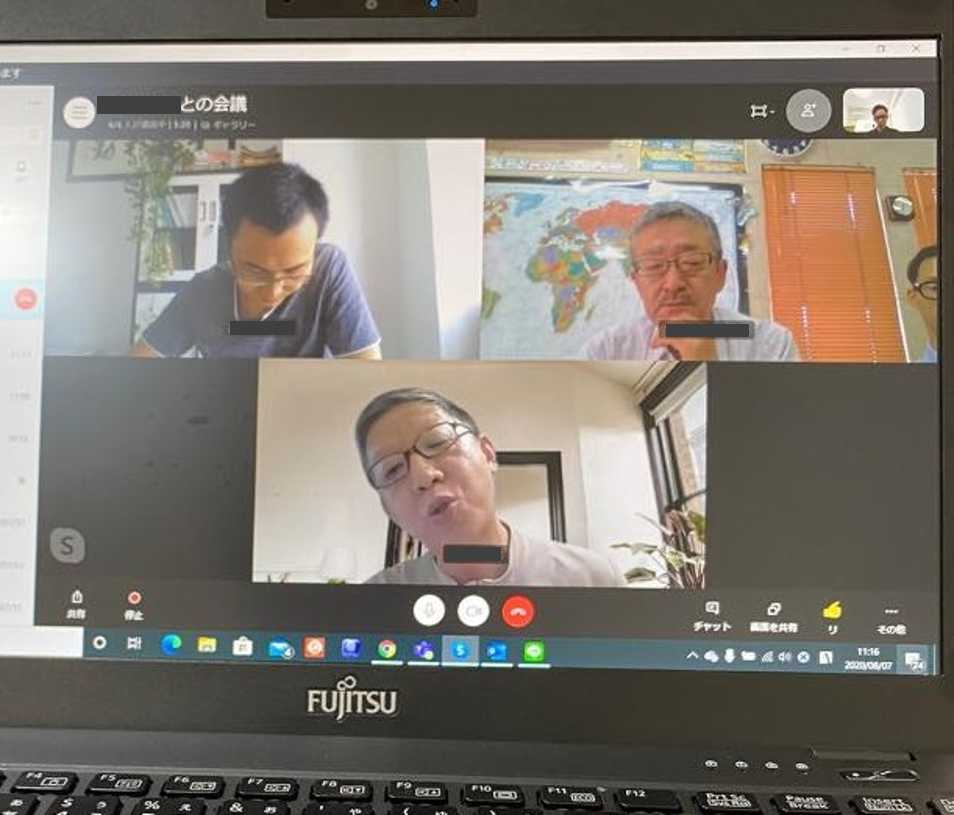 Online meeting scenery ※It is different from this meeting

In words, it seems to be easy, but I think that the enthusiasm and ease of understanding of conveying it to others in their own language (Chinese) cannot be changed at all.

Using translation tools such as Google Translate to understand most of the meaning is still an advanced businessman style, and I personally feel that I want too much for ordinary Chinese factories.
In the future, we will support you when there is a doubt about how we proceed with each other.

Of course, as Mr. A, I don't know if this interpreter really conveys our intentions, but we have trusted our company because of the experience we have worked with so far.

This service is also available to customers who use our company for the first time. In addition, there is no need to be certified by PSE or radio law, and we also accept a one-off request called "negotiation with the factory".

In addition, there is a way to use it to confirm with the factory whether the factory actually responds properly though you want to advance certification.

By all means, we hope to make a leap forward in our Business in China by utilizing our services. If you are interested, please contact us.