I'm telling you how to do authentication such as PSE, Radio Law, PSC, etc. well on this site, but I would like to take up an example of a person who is not doing authentication well (current progressive form) once in a while.

First of all, I would like to say that this is not a story due to our lack of certification technology, but because of a lack of discussions between the client and the Chinese production plant.

If you only listen to the story, what are the businesses doing? It may be a feeling, but I think that there are many parts that apply in the same way to companies that are certified for the first time, especially individuals, so please learn such a place firmly as a stone of another mountain.

As I wrote in the previous article, authentication failed! Since the arrangements to proceed with certification are not understood, I think that you can make a plan for your company to proceed advantageously based on cases where other companies are struggling.

Among them, please refer to the consulting conducted by our company, a certification agency, and the solution plan presented to the client.

Jijiri (1): I was deceived by the word "PSE certified" in a factory found in Alibaba

Mr. A, the business owner, imported China at an individual level and had a career of about a year. While gradually getting used to the import business, I was pushed by the momentum of the emerging Chinese business operators, and I was sending every day that it was difficult to lead to results.

Among them, if it is a certified product, Chinese operators can not enter, and I thought that it could differentiate from Japanese operators, so we received a request from our company.

The specific product name is hidden, but it is a small, handy type PSE product. With this product, Mr. A is familiar and knows who is likely to be wholesale, so I thought it would be a big business opportunity, so I decided to challenge authentication.

Then, I contacted a manufacturer opening a store in Alibaba through a sales agency in China.

I would like you to cooperate with PSE certification,

The factory answered that the factory was doing PSE certification.

Mr. A is overjoyed to think that pse can be saved, but if you look at the certificate submitted by the factory, 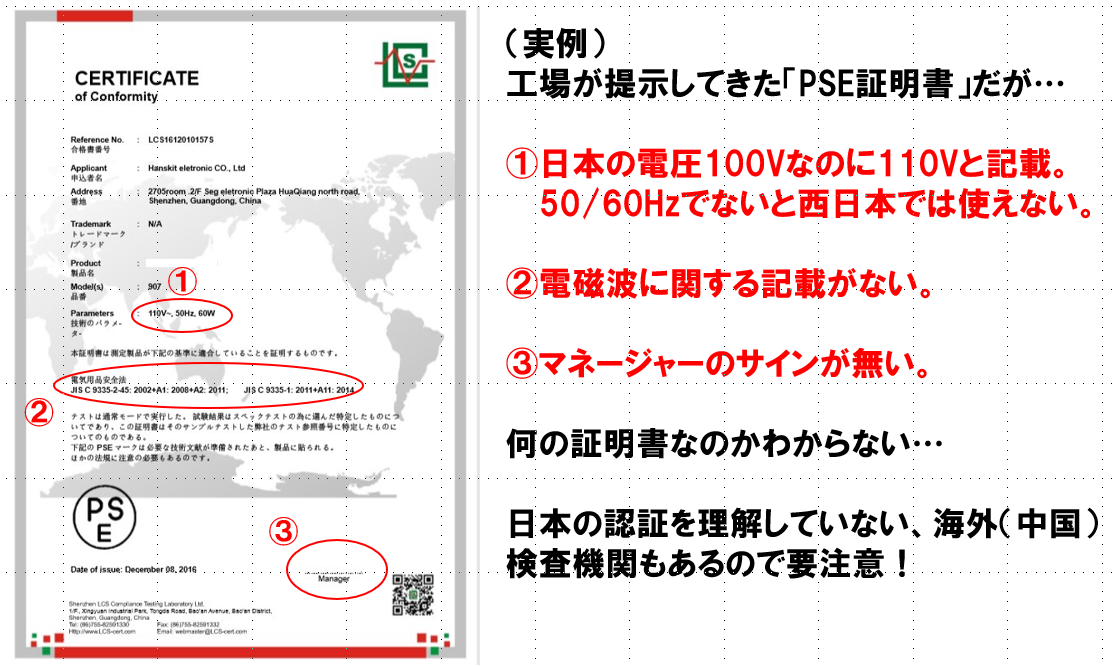 In addition, when mr. A contacted me, I was just in Shenzhen where the factory address with the certificate was located, so I went to that address、、、 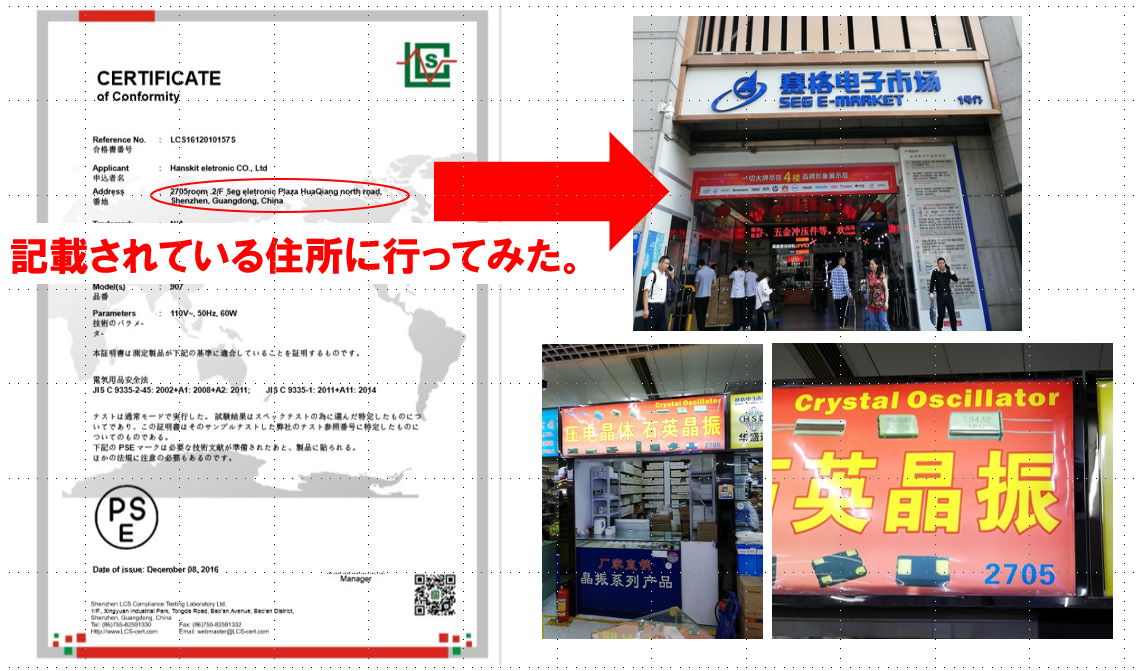 A completely different property. . . Furthermore, since it is "production factory address" to describe on the certificate, it does not mean anything even if the address of the dealer is written.

In China, such forgery of addresses is rampant, and it is not uncommon for Japanese businesses to visit the factory directly about once and twice when requesting certification from a Chinese factory.

However, mr. A is doing it on an individual level, so it may be difficult to do so much, but it can be said that it was better to doubt the "certified" appeal of the Chinese factory.

Simply put, this certificate was fake. It is a copy certificate that simply displays the letter PSE.

2: I'm depressed and the second action is slow, and the overall schedule is delayed.

When I tell Mr. A about the situation in Shenzhen, mr. A is exactly in order to pay the factory and collect the price. Of course, it was unavoidable to be impatient, and I was in a state where I did not know how to deal with such troubles because it was the beginning.

By the way, as advice from our company, I was told to the factory as follows.

"I paid a deposit for your product on the condition that I have PSE certification, but when I checked with a specialized company, I found that it was not PSE certified, so I want you to refund it."

Then, the factory also admitted our fault and answered the refund. In fact, it seems that we had not procured materials yet, and the funds were untouched, so we had a settlement without any problems.

At the time of this advice, I remember well that we already praised ourselves as a consulting company for Chinese business, not just a certification agency lol.

After returning to the story, Mr. A regained the funds for the time being, but he wanted to authenticate without abandoning his ambition for PSE certification.

That's why I gave Mr. A the business card of the dealer I found in Huaqiangbuking Electric Street while I was in Shenzhen, and encouraged him to negotiate with the dealer. The dealer seemed to have a reasonable factory, so I felt there was hope.

However, I was depressed after failing for the first time and my main business (main business) was busy, so the confirmation work was delayed little by little.

Then, the chinese new year entered as it was, and the spread of the coronavirus that shook the world began, and in the calendar, even when the Chinese New Year dawned, it became impossible to contact the factory.

The coronavirus itself may be a natural disaster once every 100 years, but as a way of thinking, especially overseas, one month or two months later、、、 I do not know whether the same state will continue in the future.

There is no need to be impatient, much less to force the other party, but I think that it is a living case that there is a possibility that the story may be derailed in an unexpected place if it does not surely do what needs to be done.

Jijiri (3): Unexpectedly panicking at the order request of large lots

The coronavirus has finally subsided and we can get in touch with the factory again. It would have been more than five months since the last process.

Even so, we were able to contact the factory, and we received a promise to cooperate with the certification, and we asked us again for certification agency.

Immediately, when we contacted the factory about samples and technical materials necessary for certification, we suddenly stopped contacting them. The communication from the factory was not available. There was no reply from the factory, so I couldn't help it here, so I had Mr. A contact the factory.

Buy 3,000 to cooperate with certification! And that.

Mr. A panicked to the number of 3,000 pieces, and he was in a state of doubt, such as whether the factory is implicitly showing non-cooperation in certification.

However, from our company's view, there are certainly many 3,000 pieces, but I felt that it was natural to require such a lot.

In short, PSE inspection requires the use of JET-certified PSE certified power cords (commercially available), and basically suppliers do not sell them separately, so it is not uncommon to be asked for a reasonable number of lots.

The factory stopped contacting us, and he felt a little risk about ordering 3,000 power cords, and the person in charge was worried about whether it was really good to receive this project.

Therefore, our proposal is to

It was to try to negotiate with such.

I do not have much funds = (current situation) If I have a frame where I can do business only with small lots, I may panic when I am told a large lot.

Of course, it is natural that everyone wants to steadily advance business in small lots, but there is a factory reason on the factory side, so it will be a negotiation how to come to terms with it.

If you're in a hurry here, your business won't go ahead.

Therefore, when we contacted the factory again, there was an answer that we could not cooperate with certification because we could not provide specifications, circuit diagrams, and component lists necessary for PSE certification.

Mr. A feels depressed in the sudden contact, but even if you do your best and contact other factories, the answer is the same.

Some possible reasons for confirming with our advisors familiar with the Chinese manufacturing industry include:

1． Originally, none of the plants in China have enough production capacity to certify this product.

2． As a reason, because it is assembled relatively easily, no factory has technical materials etc. In other words, documents cannot be submitted.

3． In addition, there is a high possibility that the assembly is done not in the factory but in the home employment. So, 2. As with, documents cannot be submitted.

I personally feel that those who neglect the laws of other people's countries need some punishment.

In any case, Mr. A has become full of the possibility of PSE authentication. The person himself can not authenticate anymore, but that this can not be authenticated seems to be able to give up if he wants to authenticate and seize business opportunities somehow because other businesses should be in the same situation.

So what was our next proposal?

In fact, we also have a business with a Japanese production plant, and unless there are problems such as patents and designs, it is possible to arrange products produced in China a little and make them in Japan.

We also have such a business process, so we proposed it to Mr. A.

Mr. A said that I wanted you to say it earlier, but basically we are a certification agency, and it is normal to authenticate at a factory designated by the customer. When it was not good by all means, I proposed it as an alternative.

In the next article, I'll tell you how this project actually went on after that.

In a word, it can be said that there is a lack of information, lack of action, and lack of judgment. Of course, it's been about a year since I started doing business in China, so I hope you'll remember it from now on, and I think Mr. A learned a lot from this trend.

However, these things are not acquired in a careless manner, but because we are constantly challenging ourselves in new fields that make us understand them.

If you want to authenticate, but do not know what kind of arrangements to proceed with in the first place, please contact us.