Rakuten Mobile Radio Law (TechnicalPtitude) Violation!? The history of the incident and three radio administrations that can be predicted in the future

Currently, rakuten mini smartphone developed by Rakuten mobile phone business company Rakuten Mobile has been reported in some media on suspicion of violating the Radio Law.

"Rakuten Mini" claims to be the world's smallest and lightest smartphone equipped with mobile FeliCa, and in addition, it has become a hot topic such as getting a terminal for virtually 1 yen when using various campaigns.

I do not know whether it is really popular and out of stock in response to the incident, but as of June 21, 2020, on the website, "Due to the favorable reception, we are currently backordered, and the delivery time of each color is scheduled in August".

This incident has been covered in a variety of cases, from major media to maniac (professional) media, and there is no new information so far, but I would like to express my views on future radio administration from the perspective of the nature of the problems at Rakuten and the Ministry of Internal Affairs and Communications and the things that conduct certification business.

I would like to review how Rakuten entered the telecommunications carrier business by quoting an article I wrote earlier, and consider why it led to such an incident.

In 1984, the year before Nippon Denko Corporation was privatized and NTT became NTT, the Telecommunications Business Act was enacted.

– Outline of Telecommunications Business Act is not discounted –

Then, in 2006, Vodafone was acquired by SoftBank, and telecommunications company SoftBank appeared. SoftBank introduced the iPhone to Japan in 2008, and the smartphone era arrived in Japan.

At that time, it is necessary to certify the Radio Act of the R mark and the T mark's T-mark Telecommunications Business Act. Even though it is high, it can be said that it is an environment that can be entered relatively easily because it is insignificant at the level of a major company.

In addition, this MVNO is being promoted by the "Mobile Birth Plan" formulated by the Ministry of Internal Affairs and Communications in October 2014.

This is due to the fact that the spread of smartphones has made it difficult to differentiate between major mobile telecommunications and telephone companies, and unhealthy competition for customers through expensive cashback and cross-selling has become rampant.

In addition, sim unlocking in 2015 became mandatory, and only the largest three companies (at that time) possessed radio waves, but users are now entering an era where terminal manufacturers and telecommunications carriers can choose freely.

By the way, Rakuten itself launched "Rakuten Mobile for Business", an IP telephone service for corporations using WILLCOM's PHS line, in 2009 by Group company Fusion Communications.

There will be synergistic effects with each business within the Group, and I think that rakuten, which has repeatedly entered various industries, was a long-cherished wish to enter a career that could take the sovereignty of the telecommunications business.

However, although there is a vast share, it is not difficult to imagine that gaining a certain share in the world of telecommunications carriers, which are dominated by the existing three companies, will be forced to fight a fairly tough battle.

I don't know if it is a cause, but since it is a company with a certain level of experience as a telecommunications carrier, I personally feel that it can not be cleared up by talking about simple radio law mistakes.

Summary of this incident

I will once again tell you the details of the incident, mainly quoting the Nikkei article.

With its own smartphone, the frequency of response was changed without formal reporting to the Ministry of Internal Affairs and Communications, and notification to consumers was delayed.

While removing the support for frequencies not used by the company's communication network, the company added frequencies used by U.S. carriers and others.

The rakuten mini's frequency was changed in May to enhance the convenience of roaming overseas, such as in the United States. There is an upper limit to the number of frequencies smartphones can support, removing the frequency used by three major Japanese companies and others, and instead adding frequencies used by U.S. telecommunications companies called "Band 4". 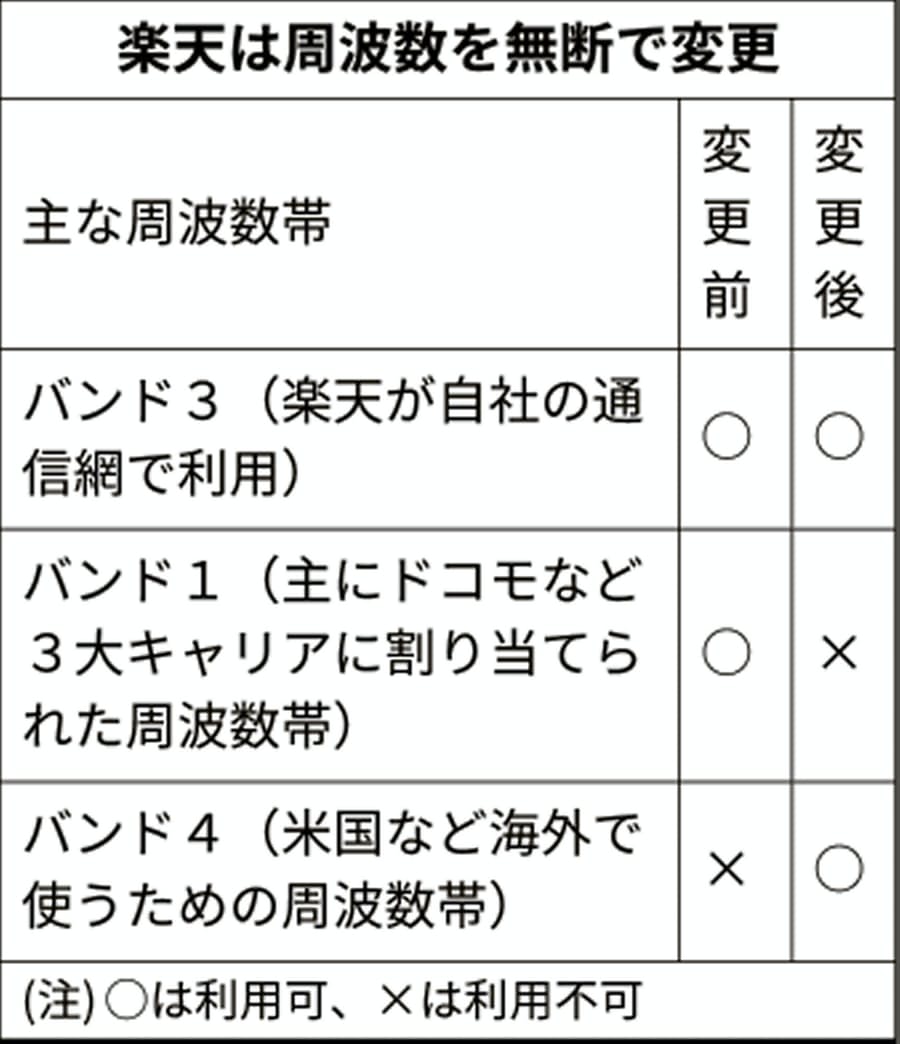 As for the reason for not reapplying for the authentication of the terminal, Rakuten explained, "Manufacturers and certification bodies responded in advance that no additional application was required." However, the Ministry of Internal Affairs and Communications also delayed the announcement to consumers, saying, "If there is a deletion of the corresponding band, it is necessary to reapply." The sweetness of the management system entrusted to the third party cannot be denied.
Quote: Nikkei_Rakuten Mobile Stray Frequency Change, Administrative Guidance and Collection (June 15, 2020)

If you are not familiar with the Radio Law, it is natural that the question of "Is it such a problem to change the number of bands?"

In particular, in the use of radio waves on a large scale such as this time, it is undeniable that there is a possibility that interference occurs with the radio wave and peripheral radio waves by changing the number of bands without permission without appropriate procedures, and in some cases, various failures such as malfunction of medical equipment at medical institutions may occur.

I will talk about the main premise that I do not know the true truth, but if you are interested in and knowledge of the radio law even a little, it is a common opinion that it is impossible to release it as it is while changing the number of bands.

Because I am involved in radio administration, applying again if the number of bands (frequency) changes is a common sense story like "Good morning!", and the excuse that I did not know will not work.

However, I do not know whether this is the judgment of the person in charge or the instruction of the top (boss). However, as I have told you many times, it is basically not a law that the seller is punished, so it is also true that it makes an evil guess that there was a conceit that it is okay even if it is barre. 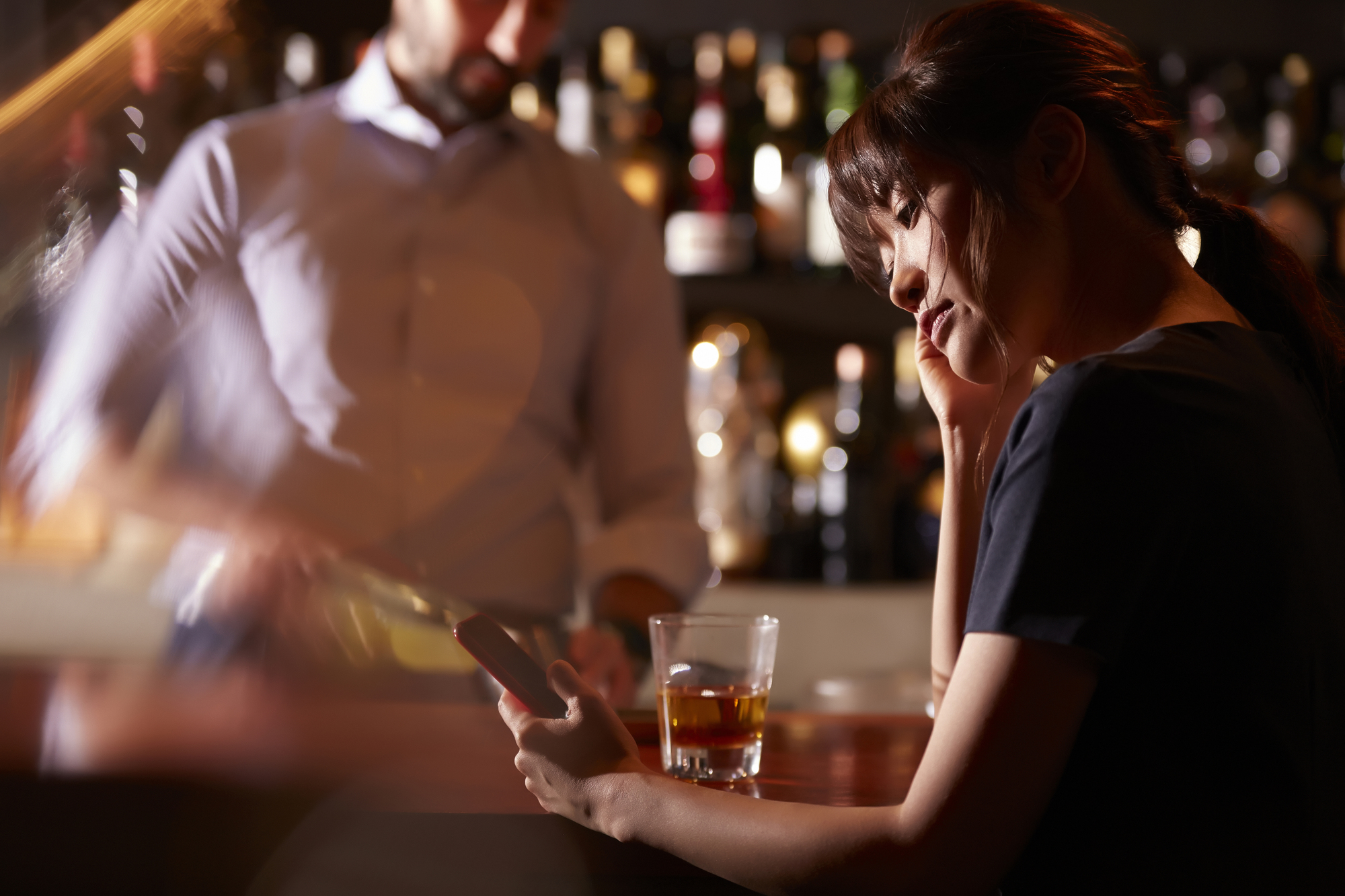 After all, what kind of non-convenience do users suffer, except that they are legally punished in this case?

After checking several related articles, I would like to quote the one that was written in the most detail.

Even if Band 1 cannot be used due to this specification change, there is no problem using Rakuten Mobile's own line and au roaming. However, there may be an impact such as narrowing the area when using overseas roaming or, for example, when using IIJmio's eSIM using other companies' lines.
Quote: engadge_, Rakuten's smartphone "Rakuten Mini" fears of violating radio law, Ministry of Internal Affairs and Communications asks for report

To be honest, it seems difficult for the average user to notice this, and even if you notice it, it will be after a large number of "Rakuten Minis" are available.

After what users punished was widely sold, it would be not possible to collect how to respond, and if there was no law to punish Rakuten Mobile for selling such things, the public's anger at the Ministry of Internal Affairs and Communications and Rakuten would have boiled.

In any case, it is said that some users (experts) notified the Ministry of Internal Affairs and Communications, and I do not know whether there is any other reason whether it is an action driven by righteous resentment.

However, although the radio law that "sellers cannot be cracked down", the person in charge of the Ministry of Internal Affairs and Communications still speculates that he thought that "this is really bad".

As I have told you several times on this site so far, illegal radio wave products by Chinese operators are currently in large quantities, mainly on e-commerce sites such as Amazon.

However, even if I contacted the Ministry of Internal Affairs and Communications, I was not able to deal with such a fact with the feeling that it was an important thing.

Even so, many Japanese suppliers, including our customers, are foolishly complying with the Radio Law in order to comply with their corporate ethics and social norms, and above all, not to disturb customers.

Based on this, and with hopeful thinking, I would like to express my views on radio administration, which is expected in the future.

I have written many times, but I think that the law that illegal goods are sold on normal e-commerce sites etc. and users who have used it without knowing it are punished.

On the other hand, there are stories that users are rarely punished, and if no one is punished, what is the law for in the first place?

The Ministry of Internal Affairs and Communications believes that opinions on this should be expressed.

I think that it is not very realistic, but after all, the money required for authentication is only a cost that is not leveraged, so there are few companies that want to actively authenticate.

What do we say about our certification agency?

As for Rakuten Mini, I do not know how it led to the violation of the Radio Law, but authentication is still only a burden, and in order for the carrier's subsequent entry group to capture the share, the price of the terminal can only be lowered, so such circumstances may be behind it.

On the other hand, if inspection costs are lowered, there is a possibility that unrivorable entrants will appear, so if certain conditions are met after obtaining certification, there may be no violations if there is an incentive (subsidy).

It will be a little position talk, but if you can't penalize the seller and the e-commerce mall that helps you sell, the number of violations will not decrease.

Since the number of Chinese operators who violate the Radio Law increases rapidly every day, it is easy to imagine that if illegal goods increase like that, it is okay for new entrants to be illegal separately.

While real stores such as home appliance mass retailers comply with the Radio Law, there is a reality that it is costly, expensive, and products can not be sold, but it is considered that the situation where illegal goods are sold cheaply at sales malls that do not have self-purification ability is not healthy.

Even if fines and penalties are difficult to operate, I would like to ask you to eradicate illegal products by forcibly suspending sales.

The story has changed from the problem of Rakuten Mini to the problem to the Ministry of Internal Affairs and Communications, but in the end, the number of cases similar to the same does not show a clear policy will increase.

I think that I expected the wise policy of the Ministry of Internal Affairs and Communications so that the trader who is seriously certified the radio law does not see the fool.

Finally, I would like to post another advertisement prohibiting illegal radio waves by the Ministry of Internal Affairs and Communications that has been posted several times on this page. 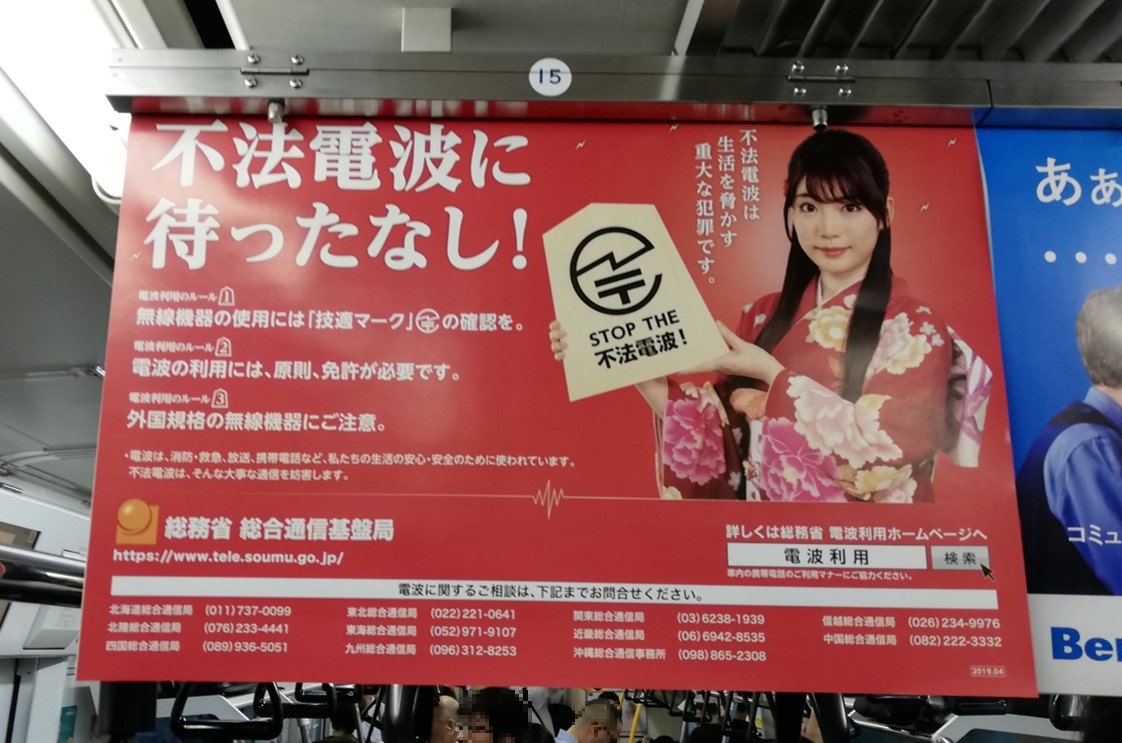